NO LIMITS: Empowering Kids Through Technology

In 2016, fourteen – year – old, self-taught coding whiz, Krish Samtani, traveled to the United States for a summer coding camp at John Hopkins University. Samtani wanted to learn practical application of coding and was pleasantly surprised at how accessible technology was in the United States. Upon returning to India, he realized that he would have to fly across the world again just to be able to attend another session. More importantly, the majority of children in India simply do not have access to this unique opportunity. Krish vowed to create free summer coding camps, which would welcome children from all different backgrounds. His first task was to find a technology company that would be willing to partner with him on such an endeavor. Krish approached Apexon’s Bangalore office with his proposal; impressed by  Krish’s entrepreneurial and philanthropic character, Apexon was quick to agree to the partnership.

In February 2017, Apexon and Krish launched the first 0Gravity session. Krish chose the name “0Gravity” because he believes that there should be “no limits” when it comes to children learning. Working with local orphanages and foster organizations, experienced computer professionals from Apexon volunteered to help host Krish’s three-month technology training camp. In 2018, Apexon’s UK and US offices followed suit and began hosting their own 0Gravity sessions. The US initially held one-off introductory training sessions with a different group of children each time. In 2019, Amy Little, HR Workforce Planner, formed a partnership with a Chicago independent school, Ryan Bank’s Academy, and began hosting weekly sessions that built upon each other. Many Apexon employees volunteered their time to help facilitate these sessions, however, Senior Data Scientist Doug Rank and Process Consultant Kevin Martelon, went above and beyond by attending almost every weekly session with Little.

Neiv Hans, a marketing associate at Apexon, sat down with the team to learn more about their personal experience with 0Gravity.

NEIV: How did you get involved with 0Gravity?

AMY: I was approached to organize and manage the 2019 US 0Gravity initiative because I am currently a mentor for the Chicago Big Brother Big Sister organization, and management knew this would be something I would enjoy taking on. My first task was to find an organization in Chicago willing to partner with us. I spoke with multiple nonprofit organizations and was eventually directed to the founder of Ryan Bank’s Academy. In 2012, 12-year-old Ryan Banks was tragically shot and killed in Chicago, his social worker, Valerie Groth, founded Ryan Bank’s Academy in order to try and prevent this tragedy from happening to another child. Ryan Bank’s Academy was opened in 2018, and their goal is to become the first tuition-free, co-educational independent school. After meeting with Valerie, I knew that partnering with Ryan Bank’s Academy would give us the opportunity to truly make an impact on our local community.

DOUG: I was tasked to give a talk to Apexon employee’s kids at the US launch party of 0Gravity. When we started doing 0Gravity sessions throughout Chicagoland, it was very natural for me to help out.  I enjoyed being a teacher’s assistant in graduate school, so I was thrilled to have the opportunity to teach a younger generation once again.

KEVIN: 0Gravity is a good opportunity for me to gain exposure from a teaching aspect for what we do as a technology consulting company. We are working with local kids and at-risk youth. Given my personal background, it means a lot to me. I wanted to do something perhaps, just outside of what you would think is a conventional work process. Obviously, it is a great opportunity to highlight what we are doing as a firm, but when it comes down to it, it’s truly about helping the kids.

NEIV: Is there one thing that you have learned from the kids or 0Gravity process itself over the past year?

DOUG: I made it a point to never forget what it’s like to be a kid or a teenager. Interacting with them certainly reinforces that they have different thought processes and handle adversity in unique ways. 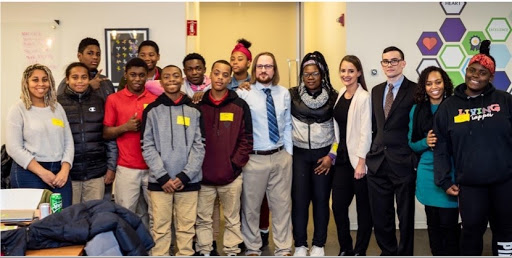 NEIV: What is “Code Kingdoms” is and how did you utilize the platform to teach the kids?

DOUG: We are teaching these kids to code in a programming language called LUA. We use a drag and drop interface, which is more intuitive for younger individuals or for those with no exposure to coding at all. We’re using this program to modify the game, and to do that, we teach them coding concepts.

AMY: Seeing as how I do not have a background in coding, and I would be leading each of the sessions, I knew that I needed to take the time and study each of the lessons. Code Kingdoms has videos, in which the instructor walks the children through how to code, however, it does not really touch on the concepts the children are learning. I decided that we needed to take a different approach. I started by watching the Code Kingdom lessons multiple times, taking detailed notes and screen shots and created a step by step instruction sheet for the kids. I walked them through the coding steps live, then gave them time to complete the steps themselves. For our final session, I watched the video multiple times and took notes beforehand again, but instead of walking the kids through it, I had them try to figure out what we needed to do. I explained to them what we were trying to make the program do with our code, and asked them how they think we should write the code. I was worried this may be too hard for the kids, but surprisingly, the session was a complete success. The kids were able to write the code with little guidance from me. It was so rewarding to see them have the confidence and capacity to code on their own.

Want to learn more about Apexon? Consult with an expert here.